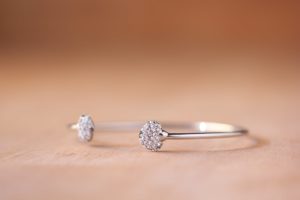 While shaping a diamond, a style or design guide is used, this is known as a diamond cut. It does not refer to any shape; instead it’s the symmetry, proportion, and polish of a diamond. If the cut of the diamond is poor then the effect would directly impact its luminosity; also while choosing the cut, the shape and size of the crystal must be taken into consideration.

It consists of a symmetrical arrangement of facets which modify the shape and appearance of a diamond crystal. The two important aspects of the cut are the polish and the symmetry. The smoothness of the facets depends on the polish; and the alignment of the facets make the symmetry. If the polish is not up to the mark then the facet is dulled and would create a blurred sparkle. In the case of symmetry being poor, the light would be misdirected when it enters and exits the diamond.

There are five types of diamond cuts such as the modified brilliants, round brilliant, mixed cut, step cut, and rose cut.